Trials of 2 to 6 months duration have shown Aceclofenac to be an effective agent in the management of pain and rheumatic disease. Data from in vitro studies indicate properties of particular interest with respect to cartilage matrix effects and selectivity for COX-2. Aceclofenac is well tolerated, with encouraging reports of improved general and GI tolerability relative to other NSAIDs from a meta-analysis of double-blind trials and from large non blind studies. Superior overall and/or GI tolerability of the drug relative to other NSAIDs has been indicated by a non randomized comparison with sustained release Diclofenac in 10,142 patients, a meta-analysis of 13 comparisons with Diclofenac, naproxen, piroxicam, indomethacin, tenoxicam or ketoprofen in 3574 patients, and preliminary details of a comparison with 10 other NSAIDs in 142,776 patients [9].

A pan-European study involving 23407 patients with pain due to various inflammatory or degenerative rheumatic diseases was undertaken in Austria, Belgium, Germany and Greece, to evaluate overall pain relief and satisfaction with Aceclofenac therapy. Aceclofenac was considered by patients to be a highly efficacious treatment with excellent and fast analgesic activity that was maintained throughout the study period. At the conclusion of the study, assessment of patient status, a parameter encompassing both efficacy against inflammatory pain and tolerability, by both patient and physician, was either much improved or improved in 84% of cases. These evaluations were similar irrespective of the country or whether the indication was acute (e.g. post-pain) or chronic pain (e.g. osteoarthritis) [12].

Patient satisfaction with, and compliance of, Aceclofenac therapy was similarly impressive; 90% of patients were satisfied and over 90% of patients were treatment compliant. In combination with the recently published SAMM study results, the findings of the European Observational Cohort study validate Aceclofenac, in everyday clinical practice, as an effective, well-tolerated and well-accepted therapy for both acute and chronic inflammatory and degenerative disease. The availability of a powerful anti-inflammatory agent with a low incidence of side-effects is of considerable value to both the patient and physician in the management of inflammatory pain. This objective has been fulfilled with Aceclofenac therapy [12].

The result of a multicentre randomised, double-blind, parallel group confirmed that Aceclofenac offers greater improvement in complete knee movement and reduced pain on movement. This study investigate the efficacy and safety of Aceclofenac (200 patients, 100 mg twice daily and placebo once daily) in comparison with Diclofenac (197 patients, 50mg three times daily) in patients with osteoarthritis of the knee. The treatment period of twelve weeks was preceded by a washout period of two weeks duration

In patients with initial flexion deformity, Aceclofenac was significantly more effective than Diclofenac in improving knee flexion after 2-4 weeks treatment. Patients’ subjective assessment of pain relief demonstrated significantly greater efficacy with Aceclofenac. At end point, 71% of patients in the Aceclofenac group reported improvement in pain intensity as compared to 59% treated with Diclofenac [13].

Aceclofenac has better tolerability profile than with Diclofenac as fewer patients experienced gastrointestinal adverse events. In particular, the incidence of treatment related diarrhea is less with Aceclofenac (1%) than the Diclofenac (6.6%) [13]. 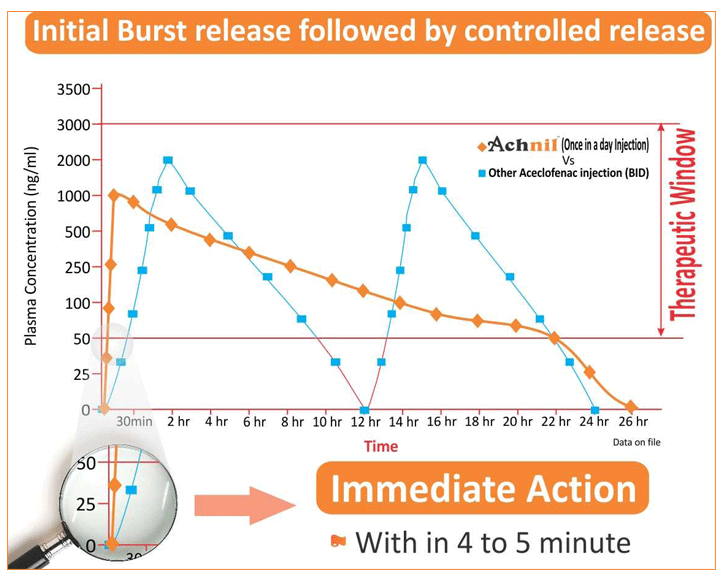 As shown in the graph initially ACHNIL immediately release approximately 20 % of the drug thus shows onset of action within 45 minutes. Then Followed the controlled release pattern up to 24 hrs which shows long action hence dose is OD Whereas other ACECLOFENAC preparations acts only for 10-12 hrs hence dose is BD

Study has been conducted on the parameters of Pain on movement, Pain on pressure, Functional impairment, Muscle contraction.